My last but not least entry about the Arctic trip I made in August this year will be about a very special, and the most Northernmost inhabited town in the world: Longyearbyen. Getting this crazily far North is currently easier than expected, with regular flight connections to Oslo, so it took me about 6 hours to travel there from Berlin. To compare: I would need to spend similar amount of time to get to Warsaw… 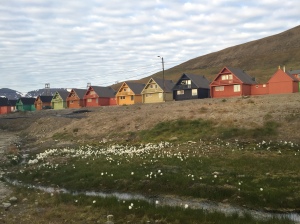 Longyearbyen, contrary to other settlements on Svalbard, such as Pyramiden, is pretty ‘busy’ or ‘crowded’ as for the Arctic standards. Apart from the travellers, Longyearbyen is a very multicultural town where over 40 nationalities work in the research centres, at the University and in tourism. It is fairly easy to meet ‘locals’ and listen to their interesting and odd-ball life stories, as one thing is for sure: Longyearbyen attracts strong personalities. 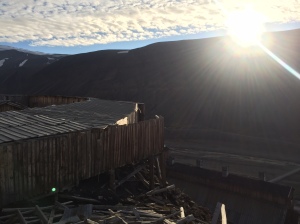 There is one more very special person living in Longyearbyen: Santa Claus! Forget Finland, the real, hardcore Santa lives far more North than Rovaniemi, and according to the locals, has chosen an abandoned mine as his directory. As the photos above are taken during Arctic summer (when sun never sets), it is hard to imagine the Mine 2b (official name) to be Santa Claus’ house. In the wintertime, however, it is decorated with colourful lightbulbs by local enthusiasts. I have to say, Santa needs to be really hardcore, as the mountain ranges on Svalbard are very steep! And slippery, as you can see below, on the Lars’ Glacier, surrounding town. 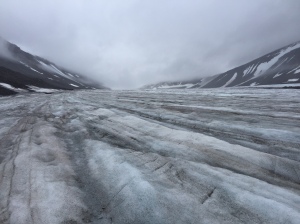 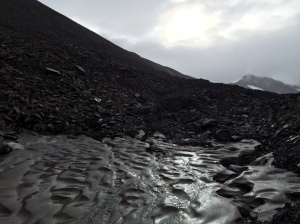 Lazy people built a facility though which enables reaching Santa Claus’ order list with no necessity to climb over 600 mts in the wintertime. Locals are not too happy about it though, thinking the huge red postbox is a bit of an overkill. Why not reaching Santa the same old way in the lovely and romantic Mine 2b?

So not only Longyearbyen is a city of Santa, but also of science and art. And it is the only place where you can walk safely without a riffle. Polar bears don’t like this town and are only an inspiration for the artists. It is very likely that e.g. the bear above, or some stuffed ones in the shopping centre or in church (!) will be the only ones one will meet. 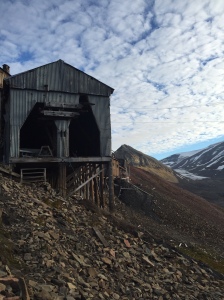 Don’t worry about leaving the safe zone without noticing. The governor of Svalbard took care of making people aware where the necessary protection should be considered. Also, finding remnants of other animals, like reindeers might be a good sign of the polar bear’s presence.

Other practical information for those planning the trip: although Longyearbyen was one of the first spots on Earth with the best bandwidth Internet connection, very few places offer free WiFi where you can send an e-mail to your dearest concerned about if you are still alive, or already being digested by a polar bear. As this is an impression you can get before travelling to Svalbard, in reality: being precautious is a good thing, but let’s not forget that polar bears are still quite an endangered species!. So the places which offer 24/7 free WiFi and cosy shelter are e.g. the local church and pub Karlsberger, listed as the 6th best pub in the world. Up to you where it feels better (make sure though to try at least once the very local brewed beer of Svalbard!). Alcohol is much cheaper than in mainland Norway, given the duty free zone of Svalbard, but tourists have consumption limits for beer, vodka and liquors. Wine and champagne may be consumed with no limits though (?!). 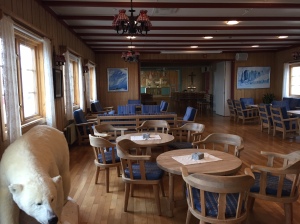 Last but not least: Longyearbyen is home for many bird species. As mid-August is already late for them, I was not lucky to spot all sorts of geese or elder ducks whose presence and nesting ground is also clearly marked, but it is good to know that they still like it there. To put my almost week-long experience on Svalbard, I was so enchanted, that re-visiting this part of the world is a question of time. As the local newspaper is issued once in two years, the goal is to get there before the next one will be out. 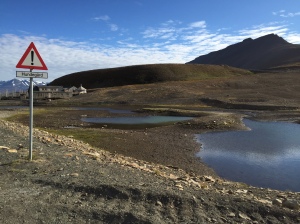 Pyramiden or Piramida (Пирамида in Russian) was one of the most beautiful abandoned places I’ve visited while exploring the Arctic Island of Svalbard. To get there you need to sail for a few hours from Longyearbyen, the administrative capital and the most populous town on Spitzbergen, the biggest island of the Svalbard archipelago.

Sailing up to 79th latitude offers spectacular views, such as Arctic skyline, fiords and mountain ranges.

Neighbouring with Pyramiden is the Nordenskiöld glacier, and its majesty can be seen from all over the town. 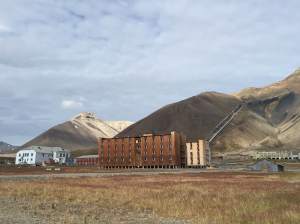 Back in a day, Pyramiden was a soviet mining settlement which was inhabited by roughly 2000 people. After 1997, when the bancrupcy of the coal company led to evacuating the entire population, it became a ghost town. For many years no foot was set there, and currently there are only a few people living in Pyramiden, taking care of the remnant buildings in the town. 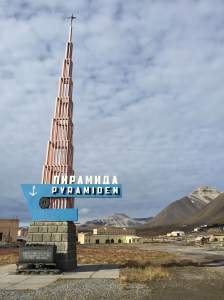 There is no mobile, nor Internet connection, but yes, indeed, there are polar bears in the settlement. I have not met any, but heard from the guide that there was one approaching, so he had to walk vigilant with his riffle loaded. 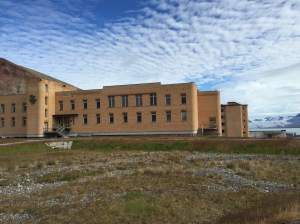 Pyramiden is very green in the Arctic summer. Even the grass greener on the Pyramiden side! Wait: grass in Arctic? Well, not naturally. In the past, Soviets tried to bring as much normality to this Artctic town, as possible. Importing food and grocery was very expensive, so they brought fertile soil from Crimea region and tried to grow veggies at the 79° latitude. As we can see years after, the experiment was not entirely absurd.

And Lenin is still there, watching the magnificent glacier and brutalist architecture. Once hosting workers’ families and offering all sort of facilities: gym, school and kindergarten, now Pyramiden’s blocks are home to countless Arctic birds. 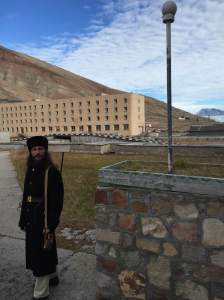 Sasha, the legendary guide and one of the few long-term inhabitants of Pyramiden. And tulips, which may still remember some wild parties on the International Women’s Day… 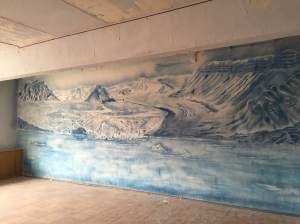 If you are visiting Pyramiden with Sasha or Pavel (the other guide who joined the town this year), you will be able to enter to cantine or culture house where the facilities and art was left untouched since the last inhabitants left.

You can even play football, contemplate in the library…

…or play balalajka and read through some important posters from the 70s & 80s. 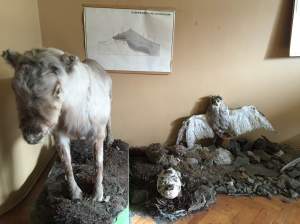 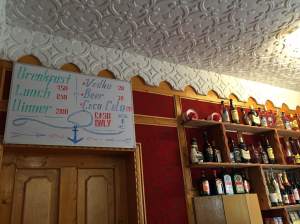 There is also a small museum presenting emblematic animal life of Svalbard. Unfortunately, many animals were torn apart by a polar bear who sneaked into the museum once in search of food, or companions. 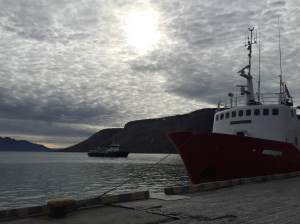 I wish I could stay longer in this magic place. After a few hours, I had to return to Longyearbyen with the MS Polargirl ship. On the way back I passed along the glacier, observing seagulls, fulmars and Pyramiden in the sunshine. Cause in early August sun never sets on Svalbard. 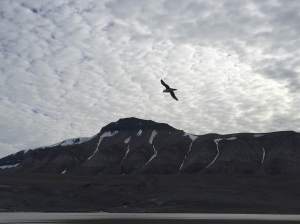 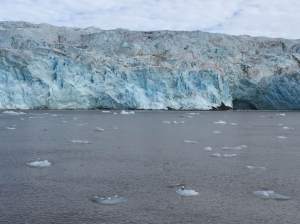 It all started a year ago when I was still living in Barcelona, so there’s not much connection to my everyday Berlin reality within this odd-ball post, except from that I did wanted to escape badly the heat wave in Europe. Around the time I visited Iceland in June 2014, my Danish colleague told me about spending last Christmas time even more drastically North: on Svalbard. Since then, my wandering soul stayed uneasy and there was no turning back for me: I knew I had to go to the Northernmost settlement in the world, sooner or later. I started studying about Svalbard, and looking for the best opportunity to go there as a tourist. Pardon me, a traveller. Being a tourist on Svalbard means something very disrespected and stupid. 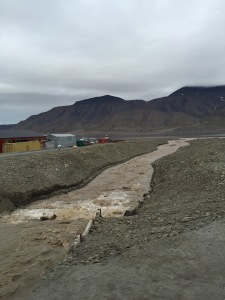 I read about moving to and around the island, paying attention to the safety regulations, and protection against the polar bears. Though polar bears are considered endangered species, they are actually quite often seen on Svalbard, so it’s better to walk protected with a riffle (asking the governor for a renting licence prior to your visit). Or with a guide. Or with a newly acquired friend in town who owns a riffle, there are plenty of options to organize your activities there actually. Bearing in mind that the mighty nature is always the most important governor of the island! 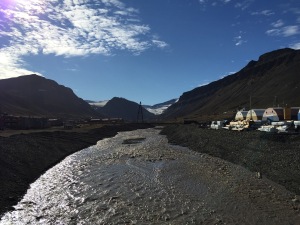 Although Svalbard is still a very remote and wild place to go, I have to say it’s pretty well-connected now with the rest of Europe. In the summer time there are about 2 daily flights directly connecting the airport in Longyearbyen with Oslo, in the winter time there’s a daily flight from Tromso in the northern Norway. Longyearbyen, currently the largest town in the archipelago of Svalbard, on its largest island – Spitzbergen offers a wide range of hostels and hotels – from sharing a dorm with some other adventurers in a former coal miners’ lodge to 5-star hotels, like Radisson Blue or Mary Ann’s Polarrigg Hotel (with a very quirky look). So all in all, to go to the Northern tip of the world from my flat in Berlin took me maybe 7 hours in total. Quite surreal, isn’t it?

While the heat was treating the continent quite cruelly last week, I spent some lovely Arctic summer days: hiking on the Spitzbergen’s mountain ranges, sailing and kayaking around the fjords and Russian settlements, birdwatching or exploring the abandoned buildings on my own. 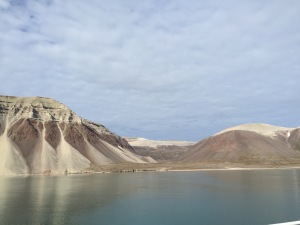 It’s not a trip for everyone. The place is pretty different to anything you’ve seen so far, and the conditions on the sea/in the mountains can get quite hostile. You have to respect the local customs and the nature, trying best to behave like an invisible tourist, which is often repeated in the informational brochures. The alcohol is very cheap as for the island being a tax-free zone, but in order to prevent tourists behaving like jerks, you have to carry your boarding pass whenever you’re buying a booze, as the quantity of what you drink is noted, and eventually – counted. Well, not really – and for the intoxicated tourists there’s a unique cell prepared too by the local governor – and I’ll definitely write about it in my next post featuring the usual day in Longyearbyen. I’ve learn best that there is no such thing as crime out there, just plenty of tourists that can spoil last pieces of wilderness on Earth. So once again: thumbs up for travelling, not being a tourist. 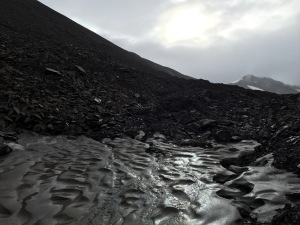