Hashima Island (端島), commonly called Gunkanjima (軍艦島; meaning Battleship Island) was one of the highlights of my trip to Japan in October. Situated just a couple of kilometres away from the port of Nagasaki, it is one of the most unusual places I’ve ever seen.

I found out about Hashima thanks to Google Earth and a friend of mine who has visited Japan earlier last year. She didn’t make it to visit the island, but knowing my passion for the beautiful decay and abandoned places, she knew that I will do my best to reach it during this trip.

Reaching Hashima proved to be not as complicated as I initially thought. Obviously, it depends greatly on the weather and sea conditions, but since it was awarded as a UNESCO World Heritage Site of Japan’s Meiji Industrial Revolution: Iron and Steel, Shipbuilding and Coal Mining in 2015, regular boat cruises to the island started to operate from Nagasaki port.

According to the tour operator, and my fellow travellers, cancellation of the cruises happen very often. Especially that I was visiting in the typhoon period, the dock on Hashima is pretty steep and landing not always is possible. I was lucky to sail when the sea was relatively quiet and on the way, I managed to hear various stories about the industrial revolution, Mitsubishi’s investment in the area that left impressive massive port architecture landscape in the Nagasaki Bay. However, a big part of the narration was also about the consequences of the brutal 19th century capitalism, and further decay of the settlements. 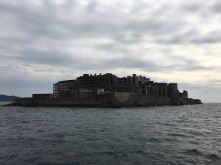 During the cruise, a former mining company employee was sharing both thrilling stories, and anecdotes about life on Hashima. Unfortunately, the narration was not always comprehensible or translated, so I could only read through his emotional language and further investigate about the industrial battleship exile. 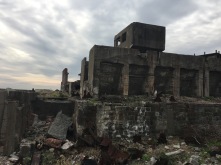 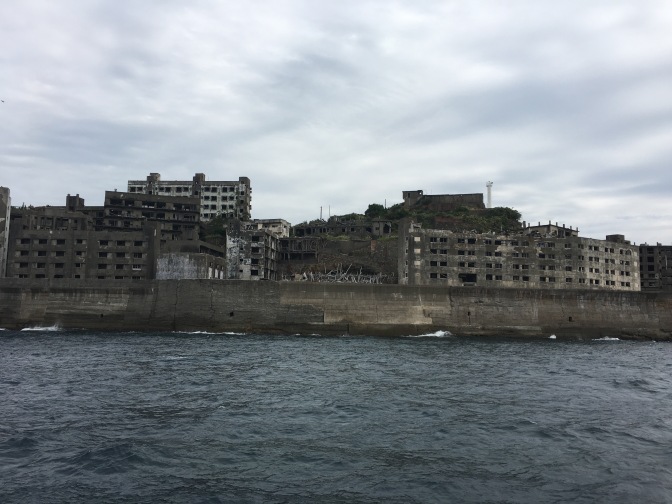 Although the trip took only a few hours, it left me very impacted by the possibilities of afterlife for the post-industrial settlements. As the world will be hopefully becoming a more sustainable place in the future, endless opportunities or creating architectural memories of the massive coal mining, or steel industry will become a destination about learning about the past.